Here it is! The best month for me in the  year – July! At that time, the summer is in full swing – the sea calls us and everywhere is full of people. In a word party! Even the beginning of July is celebrated with a celebration – july morning. Let me tell you how we celebrate this holiday in Bulgaria. 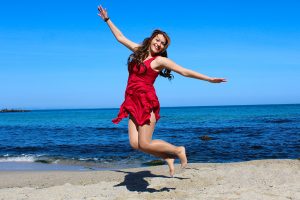 In the past July Morning was the epitome of forbidden things. Then the young people gathered to sing banned songs ,to protest against  communist authorities and to praising free love against the backdrop of a fireJuly morning in Bulgaria are celebrated from 80 years of the last century. On every June 30th against July 1st large groups of people gather along the coast to greet  with the sun, which rises above the sea. They believe that this will purify their soul. This should happen in front of the new rising sun. On July morning the people gather on the beach, they celebrating all night with guitar, beers and good company and so they greets the July morning. In the begining in Bulgaria July Morning was celebrated only in Varna, as over the years spread along the entire coast. Now each year for the feast organize events in different cities in the country.

The excitement from the first morning rays as a symbol of nascent life is still a major cause people to celebrate. This year on July 1 at sunrise ,like on traditionally, hundreds of young and not so young people wait for first sunlight on the sea. A wonderful way to start the sunniest month of the year.